This year may have been tough for the world but for console fans, it has been exciting as Sony and Microsoft continue to surprise fans with launch updates on the new PlayStation 5 and Xbox X series.

Recently, Microsoft announced the price and the launch date for the Xbox Series X and S. Now, Sony is all set to make some big announcements at the PlayStation Showcase on the 16th of September.

The next-generation consoles are focused on offering greater power, speed and improved visuals and when it comes to the internal specs used to achieve these things, the PS5 and Xbox Series X aren’t too far apart.

This generation, Microsoft is putting a step forward by offering exclusive Series X games at first to emphasize Xbox Game Pass and cross-gen play while Sony introduced the first-party lineup with exclusive PS5 games that will make use of the console's power and the features in its new DualSense controller.

As we wait for more news, here is a comparison of both consoles to see what you can expect:

Sony has confirmed a "Holiday 2020" release date for PS5, meaning the console could drop anytime between October through to December.

The PlayStation 5 will provide 10.28 teraflops of graphics processing power and features an AMD RDNA 2 GPU with 36 compute units clocked at 2.23GHz.

The CPU is a custom 8-core AMD Zen 2 unit that has been clocked at 3.5GHz and will run at variable frequencies.

The console will also offer 16GB of GDDR6 RAM along with an 825GB SSD which will be able to deliver bandwidth of 5.5GB/s.

Additionally, Sony will allow users to expand their storage with an NVMe SSD expansion slot or by using an external HDD through USB.

The PS5 will also be offering DirectX ray-tracing capabilities to ensure better visuals and to allow for a more realistic audio environment, Sony is delivering this audio through the Tempest Engine.

The console will support screen resolutions of up to 8K – far higher than the standard 1080p HD of most people’s televisions and work at 120Hz refresh rates, allowing for super-smooth movement in games.

Sony has also created several accessories for the PS5, including a DualSense charging station, a new HD camera, a Pulse 3D wireless headset, and a media remote.

The company noted that the PS5 can be placed vertically or horizontally underneath a TV or monitor and the device includes vents for heat dissipation, with USB-A and USB-C ports at the front.

Earlier this year on the 7th of April, the company first introduced the PS5’s DualSense controller which features adaptive triggers, haptic feedback, and a new create button that’s designed to share gameplay content.

Like the company’s DualShock controllers, the D-pad and buttons will remain on the top half of the controller while its two analogue sticks will be on the bottom. The DualSense will also have a centre-mounted touchpad and a redesigned light bar that sits on each side of the touchpad.

These pieces will be a limited edition with only 250 pieces made per model/finish. The price includes 1 x PS5 Console, 2 x Dualsense Controllers, 1 x 3D Pulse Headset. The Playstation 5 will be presented in a Luxury wooden display box with free worldwide shipping & insurance.

Keep in mind, that these are not official prices for the normal standard Playstation 5 but only for the these customized editions. 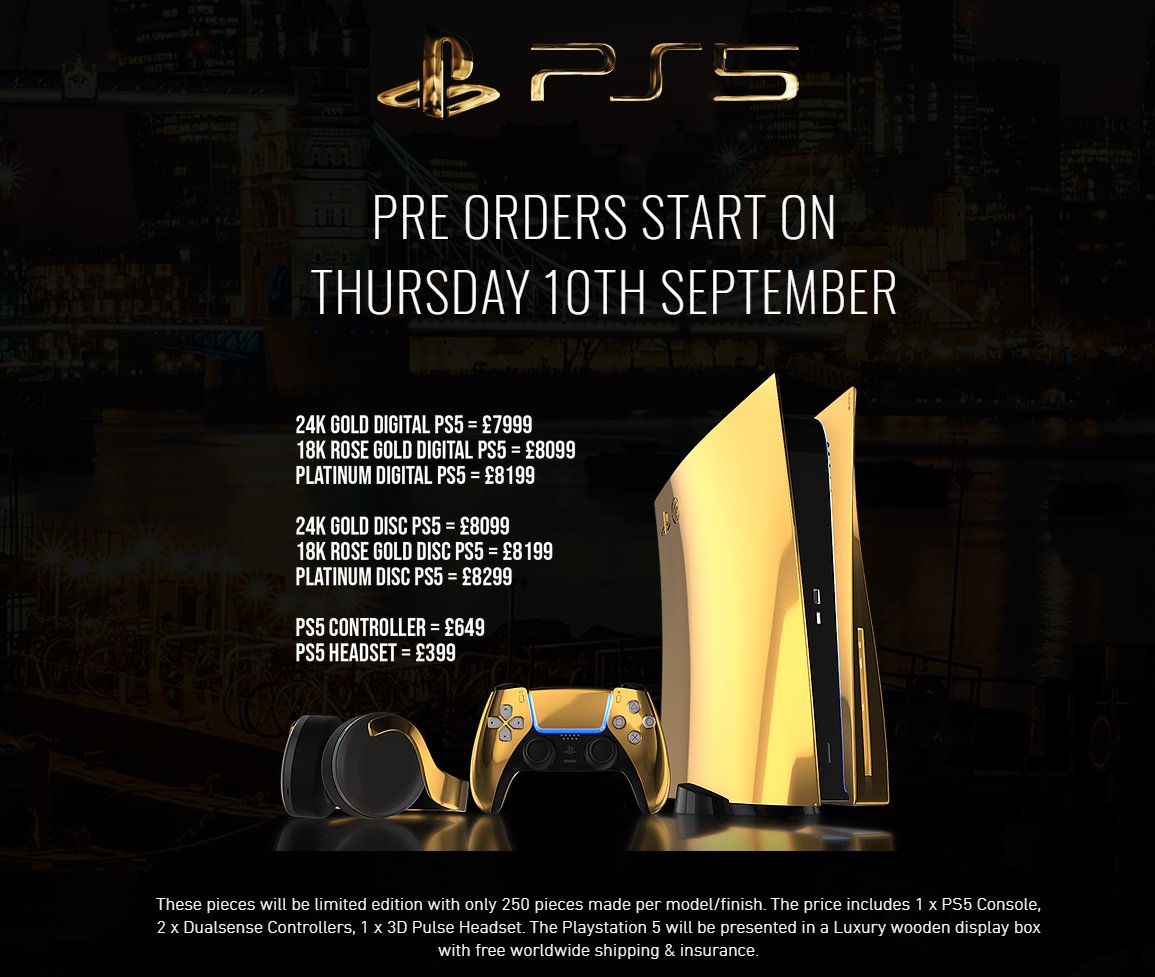 Microsoft has confirmed the Xbox Series X will release on November 10, 2020.

The Series X is the bigger and more powerful console on paper featuring 12.15 teraflops (TFLOPS) of GPU power.

Microsoft has confirmed that the Xbox Series X won't have HDMI input nor an optical digital out.

The processor is a customized AMD Zen 2 CPU, with eight cores and 16 threads and it will be able to run content at an 8K resolution, and it will also support 120Hz refresh rates at 4K.

The Xbox Series X will match the PS5 by offering DirectX ray-tracing capabilities, and it’ll have a super-fast internal NVMe SSD (which can be expanded with a propriety NVMe card), and can be utilised as virtual RAM to lift load times by up to 40x.

Standard RAM will be of the GDDR6 variety, with the Xbox Series X including 16GB – a pleasing upgrade over the Xbox One X's 12GB GDDR5.

The next Xbox will also be backwards compatible with the Xbox One’s supporting hardware accessories, meaning that you won’t have to rush out and buy new pads and headsets to accompany the console at launch.

The Xbox Series X controller will include a few new features, such as a dedicated share button and textured bumpers and triggers but it's not going to be exclusive to Series X games like the DualSense.

Microsoft has also announced a Quick Resume feature that will let you have multiple games paused on the console at once, and allow users to pick up where they've left off.

Here is a specifications comparison table:

According to Sony, the PS5 will also support the majority of the more than 4,000 PlayStation 4 titles that exist today.

Amongst the launch games are Astro's Playroom that will come pre-installed on every console, Destiny 2: Beyond Light, Madden 21 and NBA 2K21.

Sony also noted that the console will be backwards-compatible. The console will apparently be compatible with most of the PS4 library but Sony hasn't said if it's planning to extend the feature to support games from the PS3 and PS2 generation.

There was also an announcement made for the availability of a Fable reboot at Microsoft's July game showcase, along with a new Forza instalment and a medieval fantasy RPG from Obsidian called Avowed.

Microsoft also noted that the Xbox Series X will be backwards compatible with all existing Xbox platforms from launch.