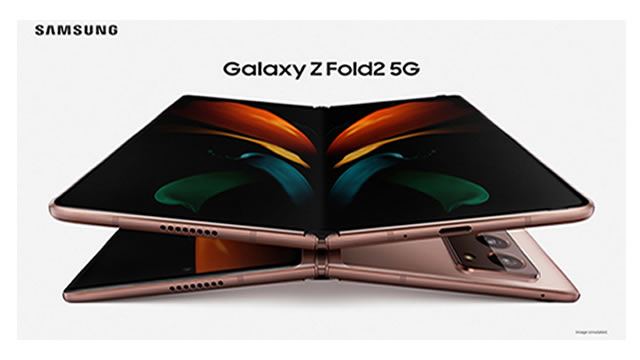 This new foldable device features two edge-to-edge Infinity-O displays, one on the outside and one on the inside of the device.

On the outside of the device, you will find a screen that is 6.2 inches in size and the primary screen is 7.6 inches. These are both larger than the displays on the original Galaxy Fold.

The display is now made of thin glass instead of the old plastic material used on the first wave of folding smartphones.

Samsung has also continued to improve its folding smartphone design, offering a more durable hinge that is more resistant to dust and other particles interfering with its movement.

The new hinge also lets users change the position of the display, which is useful when combined with the different configurations enabled by Samsung’s Flex UI software.

The device is powered by a 4,500mAh battery, a Qualcomm Snapdragon 865+ mobile chipset which supports 5G network connectivity as well as Wi-Fi 6 and Bluetooth 5.1.

The device also comes with 12GB of RAM, 256GB of internal storage, and a USB Type-C 3.1 connector for fast wired charging and data transfer.

The device comes with a rear triple-camera system comprising three 12MP sensors is contained in a large rectangular bump on the rear of the device.

This camera system boasts impressive photography capabilities including the ability to record 4K video at 60FPS, as well as HDR photography support.

A 10MP single front-facing camera sits on the cover display, with an identical selfie camera set into the main folding display.

The company added that the Galaxy Z Fold 2 will be available for pre-order from 7 September.