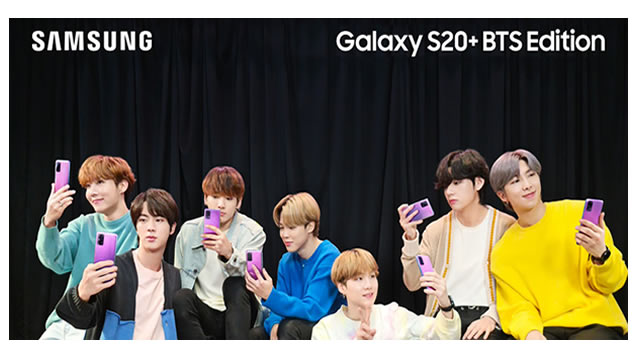 This partnership will be giving an exclusive opportunity for fans worldwide to connect more closely than ever with their favourite band.

The new design of the Galaxy S20+ BTS Edition features a purple glass and metal exterior. The Galaxy Buds+ BTS Edition and Buds+ charging case, also available in purple, carry the band’s logo and purple heart iconography, allowing fans all over the world to show their devotion through their smartphone and wearables.

Right in the box, the device comes with decorative stickers to allow fans to further personalise their devices, and photo cards featuring pictures of the band members for fans to keep.

It will feature the same great pro-grade camera that Galaxy S20+ owners around the world use to capture their lives and tell their stories.  The device provides new ways for BTS and their global fans to feel more closely connected than ever before, and share their creative content with each other.

“Galaxy S20+ and Galaxy Buds+ BTS Edition are the result of a collaboration between BTS, whose members spread messages of love and harmony through music, and Samsung, which is creating a better future with meaningful innovation,” said Justin Hume: Director: Integrated Mobility at Samsung South Africa. “We hope it will be a source of joy and entertainment for fans and consumers around the world.”

The devices will become widely available from July 9th, which marks the seventh anniversary of the BTS fan collective.